On the Road - Behind the Scenes Travel Photos & Videos 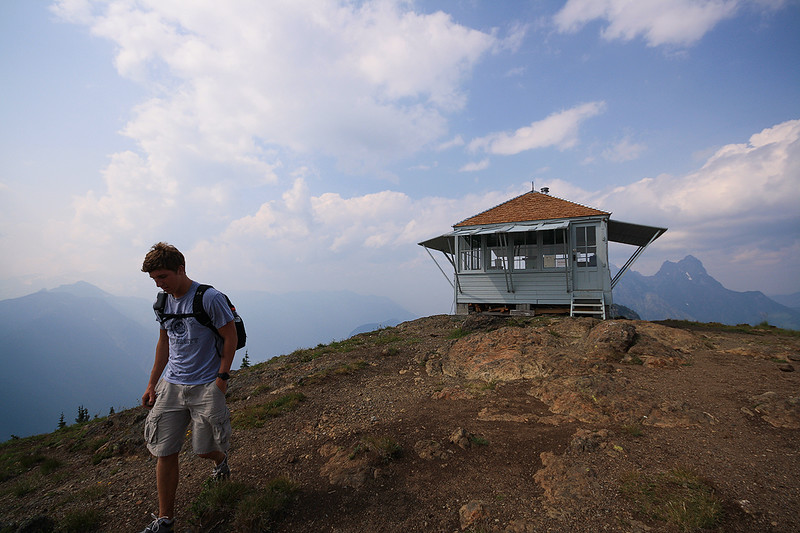 My Brother Lee On Our Second Trip to Desolation Peak - North Cascades, Washington

One of my favorite authors Jack Kerouac Spent 63 days in that fire tower in 1956. He wrote about the experience in Dharma Bums ( Great book by the way ). This tipped Lee & I off to go check it out on our own. Wow what a place!

From the Dharma Bums
And suddenly I saw the Northwest was a great deal more than the little vision I had of it of Japhy in my mind. It was miles and miles of unbelievable mountains grooking on all horizons in the wild broken clouds, Mount Olympus and Mount Baker, a giant orange sash in the gloom over the Pacific-ward skies that led I knew toward the Hokkaido Siberian desolations of the world. I huddled against the bridgehouse hearing the Mark Twain talk of the skipper and the wheelman inside. In the deepened dusk fog ahead the big red neons saying: PORT OF SEATTLE. And suddenly everything Japhy had ever told me about Seattle began to seep into me like cold rain, I could feel it and see it now, and not just think it. It was exactly like he'd said: wet, immense, timbered, mountainous, cold, exhilarating, challenging. The ferry nosed in at the pier on Alaskan Way and immediately I saw the totem poles in old stores and the ancient 1880-style switch goat with sleepy firemen chug chugging up and down the waterfront spur like a scene from my old dreams, the old Casey Jones locomotive of American, the only one I ever saw that old outside of Western movies, but actually working and hauling boxcars in the smoky gloom of the magic city.

Now I was beginning to see the Cascades on the northeast horizon, unbelievable jags and twisted rock and snow-covered immensities, enough to make you gulp. The road ran right through the dreamy fertile valleys of the Stilaquamish [Stillaguamish] and the Skagit, rich butterfat valleys with farms and cows browsing under that tremendous background of snow-pure heaps. The further north I hitched the bigger the mountains got till I finally began to feel afraid. I got a ride from a fellow who looked like a bespectacled careful lawyer in a conservative car, but turned out that he was the famous Bat Lindstrom the hardtop racing champion and his conservative automobile had in it a souped-up motor that could make it go a hundred and seventy miles an hour ...

The fellows who picked me up were loggers, uranium prospectors, farmers, they drove me through the final big town of Skagit Valley, Sedro Woolley, a farming market town, and then out as the road got narrower and more curved among cliffs and the Skagit River, which we'd crossed on 99 as a dreaming belly river with meadows on both sides, was now a pure torrent of melted snow pouring narrow and fast between muddy snag shores. Cliffs began to appear on both sides. The snow-covered mountains themselves had disappeared, receded from my view, I couldn't see them any more but now I was beginning to feel them more" (The Dharma Bums, 222-223).